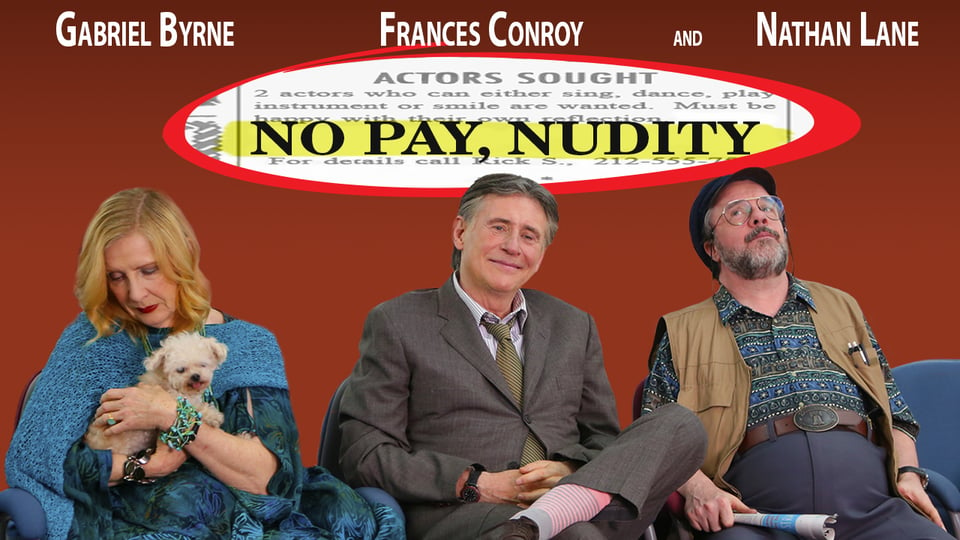 Aging actor Lester Rosenthal (Gabriel Byrne – The Usual Suspects, Miller’s Crossing)
has lost his way. In this often humorous, yet warmly poignant story,
love and friendship, jealousy and re-discovery, career, family, and
friends (Nathan Lane – The Birdcage, The Producers) intertwine
as Lester navigates the perplexing realities facing so many of us as we
pursue dreams and dignity. A film about hanging out, hanging in, and
hanging on.

“NO PAY, NUDITY has a quality that has become increasingly rare
in contemporary film: it is profoundly human. There’s not a bad acting
moment in it, and the scale of director Lee Wilkof and writer Ethan
Sandler’s film is modest but possessed of a sophisticated philosophical
intelligence. It’s a surefooted piece of filming and a wonderfully
rendered character-driven investigation of hope and envy, resentment and
despair, acceptance and frailty.” – Amy Glynn, Paste Magazine

“…Warm, deeply funny, sensitive and, in its way, essential.
Intimate in scope but expansive in feeling, this charmer stars Gabriel
Byrne and — in one of the finest performances of his remarkable career —
Nathan Lane in a fat suit. It’s the best film about the actor’s life
since BIRDMAN.” – Jeremy Gerard, Deadline