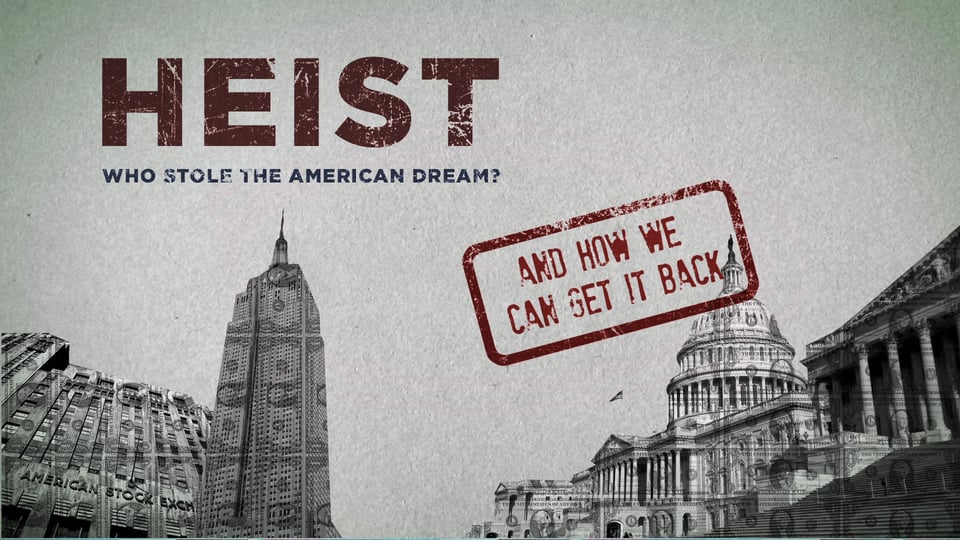 This
investigative documentary reveals how American corporations
orchestrated the dismantling of middle-class prosperity through rampant
deregulation, the outsourcing of jobs, and tax policies favoring
businesses and the wealthy. HEIST exposes the roots of the American
economic crisis and the destruction of the American dream.

The collapse of the U.S. economy is the result of conscious choices
made over thirty five years by a small group: leaders of corporations
and their elected allies, and the biggest lobbying interest in
Washington, the U.S. Chamber of Commerce. To these individuals, the
collapse is not a catastrophe, but rather the planned outcome of their
long, patient work. For the rest of the country, it is merely the
biggest heist in American history.

“(HEIST) has the virtue of taking the long view of a crisis that
recent films like INSIDE JOB and TOO BIG TO FAIL have only sketchily
explored. It makes a strong case that government regulation of business
is essential for democracy to flourish.” — Stephen Holden, The New York Times

“Wherever one’s politics fall on the spectrum, there is much in
here — such as a maddening video clip in which an American law firm
offers counsel on how to avoid hiring American workers — likely to give
one pause.” — Mindy Farabee, L.A. Times