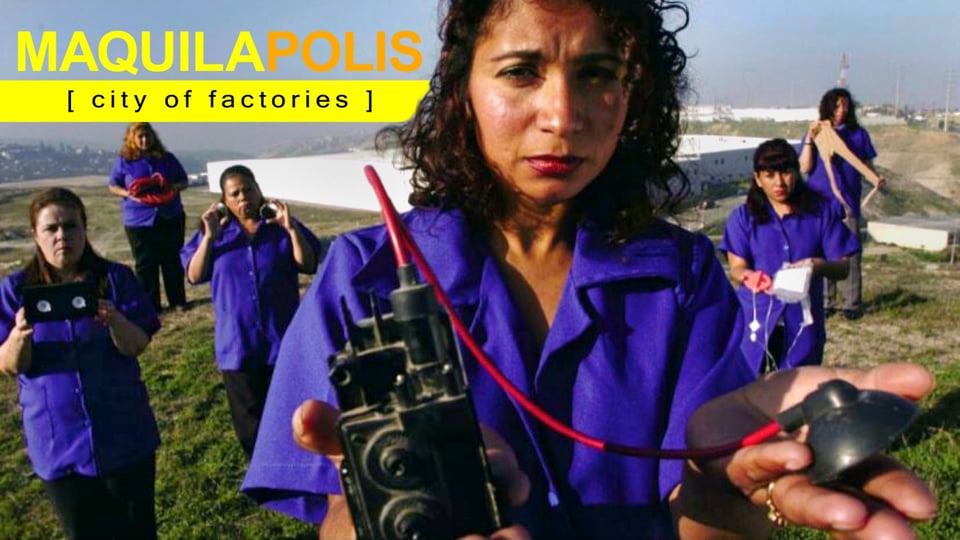 Carmen
Durán works the graveyard shift in one of Tijuana’s 800 maquiladoras;
she is one of six million women around the world who labor for poverty
wages in the factories of transnational corporations. After making
television components all night, Carmen comes home to a dirt-floor shack
she built out of cast-off garage doors from the U.S., in a neighborhood
with no sewage lines or electricity. She suffers from on-the-job kidney
damage and lead poisoning from her years of exposure to toxic
chemicals. She earns six dollars a day on which she must support herself
and her three children.

Starting in the 1980s the U.S. and Mexican governments initiated a
trade agreement allowing components for everything from batteries, IV
tubes, toys to clothes to be imported duty-free into Mexico, assembled
there and then exported back duty-free as finished consumer goods for
sale in the U.S. Tijuana became known as the television capital of the
world, ‘TV-juana.’ Globalization promised jobs, and working class
Mexicans uprooted their lives to flock to the northern frontier in
search of better paying work. After a decades long boom in 2001, Tijuana
suffered a recession as corporations chased after even cheaper labor in
Asia. When the Sanyo plant where Carmen worked for six years moved to
Indonesia, they tried to avoid paying the legally mandated severance
pay. Carmen became a promotora, or grassroots activist, challenging the
usual illegal tactics of the powerful transnationals that are poisoning
their workers and the barrios they inhabit.